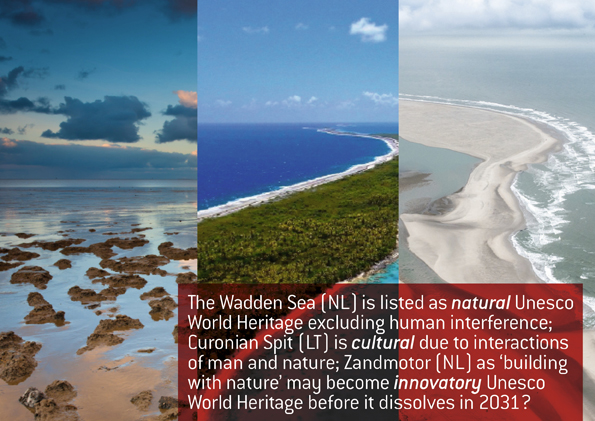 We all live in the bubble of a Truman Show.
One day you wake up and realise what kind of world you live in.
Living in the Netherlands and Nida in Lithuania means living in an artificial man-made environment. Looking at the conditions of these two coastal landscapes it strikes that the precarious liminality of coexistence between man and water becomes most evident in places that appear to be natural environments but are in fact cultural landscapes. Like living in a theme park, pleasing to the eye without worries and full of leisure and endless entertainment.
Whilst the Curonian Spit – where Nida Art Colony is based – has the status of cultural Unesco World Heritage as word wide example of interactions between man and nature, in The Netherlands – where Satellietgroep is based – the Dutch are masters in disguising the cultural landscape as a natural one. We tend to design, construct, reconstruct and deconstruct nature to fit it to our needs. Creating a condition where we are so intertwined with the landscape, it becomes impossible to make a distinction between man and nature. In fact, the constructing of nature is proudly called ‘New Wilderness’. The conditions are so controlled that we are incapable to let it run it’s natural course. Our sentiment can’t stop us from feeling sorry for the animals that die ‘naturally’ in the Oostvaardersplassen (a man-made nature reserve in the Netherlands).
In contrast to the cultural Unesco status of the Curonian Spit, in the north of The Netherlands The Wadden Sea is natural Unesco World Heritage. Though it is the largest and ‘unbroken’ intertidal mud flat area, it still exists due to human interferences. However, on the Unesco charts of the Wadden Sea the shipping lanes and the islands are excluded…… Is this denial of human existence and the impact on nature?

I would like to reflect on man-made landscapes and the role of arts in imaging of nature.
“Landscapes are cultures before they are nature; constructs of the imagination projected onto wood and water and rock. [...] But it should also be acknowledged that once a certain idea of landscape, a myth, a vision, established itself in an actual place, it has a peculiar way of muddling categories, of making metaphors more real than their referents; of becoming, in fact, part of the scenery.”  (Simon Schama, Landscape and Memory, London,1995)

Arts after nature – or nature after arts?
Artists construct a conception of nature, so we can relate and refer through these images to nature. Through these conceptions artists change the way we perceive nature. Even change the concepts of how nature should look as landscape are nowadays re-shaped to resemble famous paintings and writings.  In that sense artists are mediators. That implies engagement and brings a great responsibility. Contemporary artists are no longer on the outside to reflect nature and shape artefacts - like Land Art - that finds their space in the world, but are at the core of changing relationship between man and nature. The old ideas of a division between either human or nature has dissolved. The accessibility to new technologies enlarged the scope of artists almost limitless. 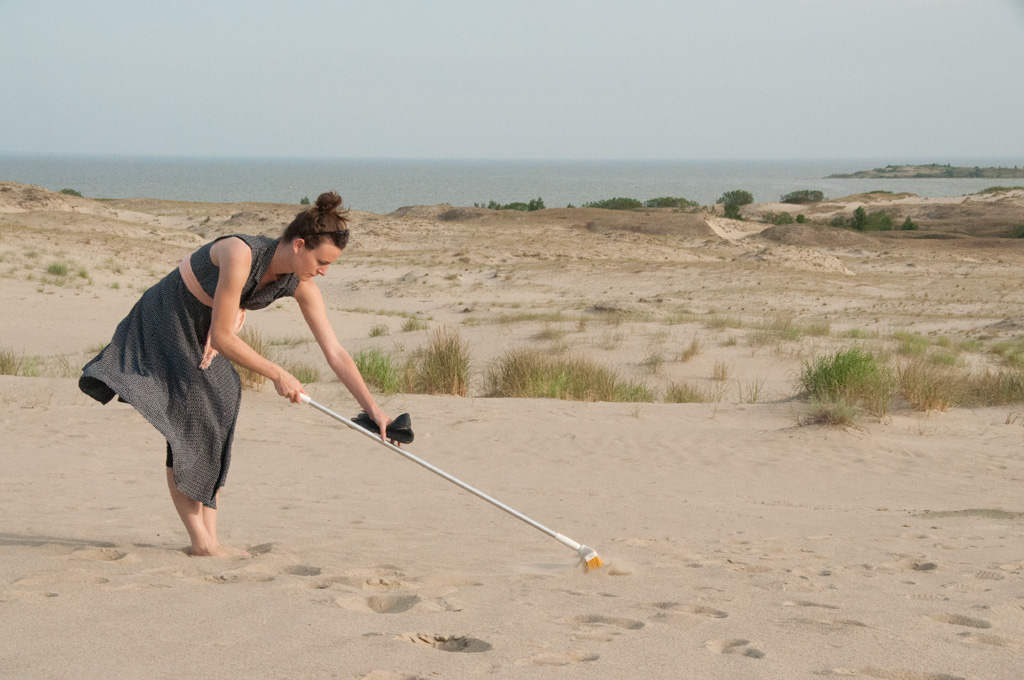 Can we erase traces of mankind? Public intervention by Theun Karelse at Nida, May 2014. Photo: Natacha Paganelli / NAC.

Local fieldwork in the context of global transitions
Awareness rises that the anthropocene era may provide no escape for nature and thus for mankind. We need to engage with global issues in order to survive. Ecosystems have no boundaries. We challenging named one of the themes of the Inter-Format Symposium ‘Man as Ecosystem’ at Nida. Faced with global prospects of rising sea levels, shrinking lands, dis balance of salt and sweet water, rivers too full of low, in The Netherlands – mostly below sea level – we need to re-invent coexistence of man and water, develop new insights both on ecology as on technology.
After building dams and dikes for centuries as coastal protections – now called ‘building against nature’ – in The Netherlands we recently made the newest contemporary cultural statement of the anthropocene era we now live in. This phenomenon is called the Sand Engine (Zandmotor, 2011), an artificial made sand peninsula in front of the Dutch coast. ‘Building with nature’, as we more or less invite the sea as a partner to help shape coastal protection by putting huge amounts of sand on the foreshore. The result is a dynamic extension of the coast, ‘a new controlled wilderness’ that slowly transforms into a spit and lagoon – similar to the Wadden Sea and the Curonian Spit and Lagoon at Nida. But the Sand Engine is designed to dissolve in the sea around 2031. It is a time machine that transports us from holocene into anthropocene. This newest (anthropocene) innovation is built with (holocene) sand from the bottom of North Sea that also brought ashore mammoth fossils 25 – 50.000 years old. This sand is said to originate from the mythological river Eridanos that once flowed from what we now call the Baltic Sea to the North Sea and shaped The Netherlands. 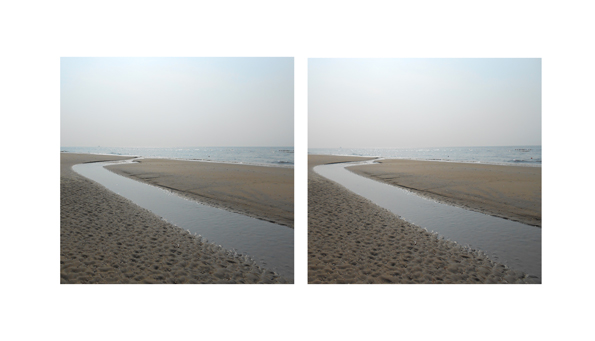 September 2014 we start the new residency program called Badgast2.0 for artistic research on the Sand Engine where Satellietgroep and Nida Art Colony will collaborate on an exchange program with artist in residencies.
Before the Sand Engine dissolves, I propose as an artistic statement to enlist it as new and innovatory heritage for Unesco World Heritage. A new narrative of the relationship of man and nature, both cultural and natural, both tangible and intangible. Innovatory heritage, as it changes our perception of protective-exclusive heritage into dynamic-inclusive heritage: intended to change – even disappear - and to trigger changes and innovations.

In this process we need the conceptual freedom of artists collaborating with scientists and engineers to explore unexpected liminal imaging of nature.
“Techno Ecologies,” a term coined or resurrected by RIXC curators Rasa Šmite and Raitis Šmits who write, “The changing role of art in society is one where it does not just create a new aesthetics but gets involved in patterns of social, scientific, and technological transformations,” (2014).
I would prefer to call it transitions or even juxtapositions.
During the Inter-Format Symposium at Nida the project ‘The Liminal Dome’ has become a myth. I did not experience it myself, so for me it can remain a myth, enriched by the endeavours tales of the returning sunrise-sunset participants. Thanks to Anna Romanenko, Björn Kühn and Gabriel Hensche for sharing this project!
The rich variety of contributions during ‘On Flux of Sand and Acquatic Ecosystems’ reflects the multi layered issues at stake.

Thank you all, I look forward to continue on this journey!
Jacqueline Heerema 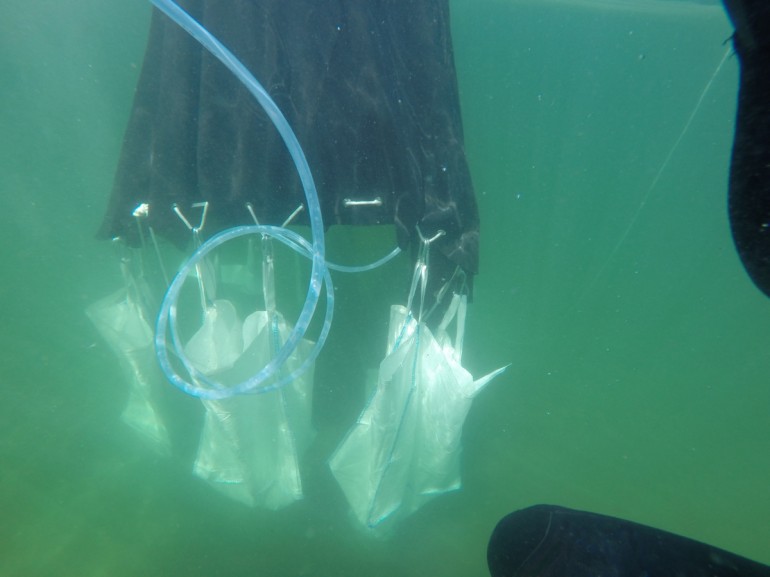