Thanks to the Sea Organ music project, the inhabitants of Zadar have been restored once more to their relation with the sea. Chaotic reconstruction work undertaken in an attempt to repair the devastation Zadar suffered in the World War II turned much of the sea front into an unbroken, monotonous concrete wall. Now, the inviting white marble steps lead down to the water. Concealed under these steps, which both protect and invite, is a system of polyethylene tubes and a resonating cavity that turns the site into a huge musical instrument, played by the wind and the sea. 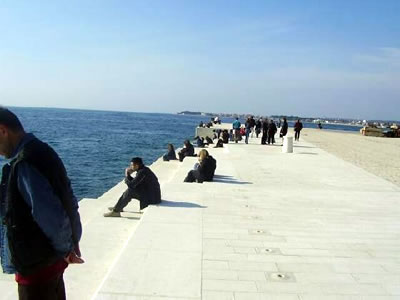 The musical Sea Organ (morske orgulje) is located on the shores of Zadar, Croatia, and is the world’s first musical pipe organs that is played by the sea. Simple and elegant steps, carved in white stone, were built on the quayside. Underneath, there are 35 musically tuned tubes with whistle openings on the sidewalk. The movement of the sea pushes air through, and – depending on the size and velocity of the wave – musical chords are played. The waves create random harmonic sounds.
This masterpiece of acoustics and architecture was created by expert Dalmatian stone carvers and architect Nikola Basic in 2005, who recently received the European Prize for Urban Public Space for this project. Many tourists come to listen to this unique aerophone, and enjoy unforgettable sunsets with a view of nearby islands. Famed director Alfred Hitchcock said that the most beautiful sunset in the world can be seen from precisely this spot on the Zadar quay. That was how he described it after his visit to Zadar, a visit he remembered throughout his life by the meeting of the sinking sun and the sea. 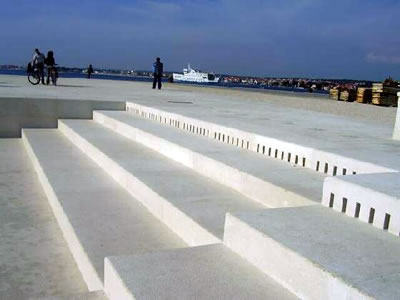