James Geurts (AU), artist and Badgast in 2010, will join Satellietgroep as co curator in March - April - May and June 2011. He is guest at DCR Gueststudio.

James Geurts’ work is based on an expanded field of drawing practice that emerges through diverse forms of installation, video, land-art, light works, photography,  works on paper, living-monochromes, sound, durational events and research. This expanded drawing practice explores the spatial and temporal dynamic of perception, and its interaction with phenomena and forces in nature and the built environment. 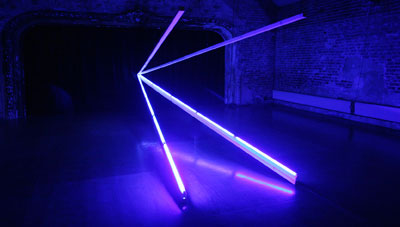 Research interests : Geurts’ work is informed by, and contributes to, the paradigms of psychogeography and ecopoetics,  engaging with the relationships between the physical world and the human experience of space and time. Combining the two through practice creates a view of the environment and the human as two interdependent circulatory systems. Bodies of water/weather cycles/conceptual systems/the human as a water-body, these are subjects in the work as much as the sense of circulation comes through methodologically and aesthetically in the actual making and form of the expanded drawings.

This art practice uses on-site research in a particular way, as a primary making methodology, continually invented given the situation and circumstances. Geurts’s overall practice has taken drawing as the base from which to work. The works are conceptual and combinational. They are multi-layered and connective, they carry with them the traces of their making, and the human quality of the process. They are based on a type of research that is slow and intense and composite.