Eliane Esther Bots is a video artist, teacher in art academy Utrecht (HKU) and at this moment participates in the Post graduate 'Documentary and contemporary art' in France.
Her work balances between film, documentary, cinéma vérité and visual art. She often uses material that could be called "documentary". At the same time she takes the freedom, during filming and editing, to change and adjust the situation, setting and storyline. This borderland, where visual art and documentary come together, gives her the possibility to recreate a new reality. With her work she shows the visual cinematic beauty within reality and the daily life surrounding us.
For her work she often travels and stays at unknown places. The last three years she especially focussed on Eastern-Europe and Russia to make new works.
This October she went to St. Petersburg Russia to participate in the Videoforma festival at the Kuryokhin (www.kuryokhin.net) center for contemporary art. Here she also gave a lecture 'In touch with reality' which concentrated on (Dutch) video art that has a strong connection with reality. In the lecture the diverse ways of 'using reality' were discussed and works of Roy Villevoye, Martha Atienza, Luuk Wilmering, Martine Stig, Jeroen Kooijmans, Jeroen Kooijmans and others were shown.

She just finished the short film 'The captain and the boy' (see stills).
In this film a father and a son cross a river several times. At the same time a story about a found dying bird and a dog unfolds. The river in the video turns out to have a deeper unexpected meaning in the end.
The film consist out of moving images, animation and still images and is shot in color and black and white. Documentary material shot in Russia and staged material is combined in the film.
At this moment she is working on a new film which will be a combination of interviews with former workers of the navy factory in Kronstadt, a port-city on the island Kotlin (Russia), a folk dance group and a staged story about a man who has a dream to fly his two meter long model plane.
For more information see: www.twosmallthings.com 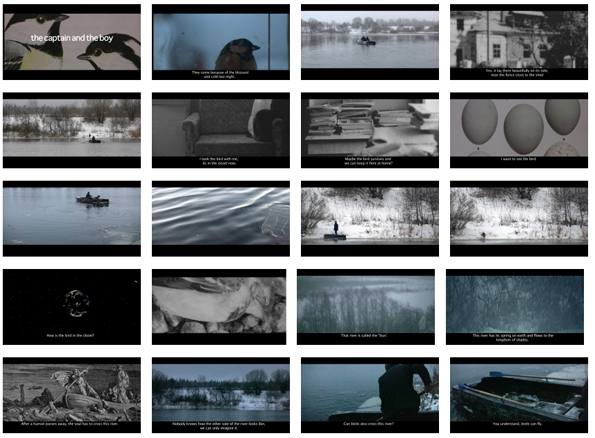 Stills: 'The captain and the boy'