March 2013:
'Az én tengerem': 'The Sea In  Me' meets first time Hungarian audience!
After Den Haag and Istanbul, 'The Sea in me' - produced by Bahanur Nasya and Yilmaz Vurucu while artists in resdident for 'NWTS'  in Sinop and The Hague - is selected to be screened at the 5th Architectural Filmfestival in Budapest. http://kek.org.hu/filmnapok/az-en-tengerem/
Festival is Feb 28-March 3rd, the film will be screened on March 2nd.

PREPARING NWTS IN GEORGIA, MOLDOVA AND RUSSIA IN 2013
The cultural exchange project 'Now Wakes The Sea' started in 2012 with Turkey in the context of NLTR400. Satelietgroep is very proud to be selected for the program for Russia, called NLFR2013. ECF provides funding to continue the project with Moldova and Georgia.
The project NWTS is initiated by Dutch Satellietgroep and involves research based artist in residence programs for artists/architects/filmmakers in coastal transition areas in countries surrounding the Black Sea and North Sea to develop new works, select existing works and program traveling film festivals for public screenings and debates on venues, both on the coast of the Black Sea as on the North Sea.

Artist run initiative Satellietgroep is based since 2006 in The Hague, The Netherlands, a country with a strong historic art and innovative relationship with the sea. Satellietgroep explores through arts and culture how the sea and waterways influence cities, people, communities and environment. Satellietgroep’s aim is to enhance public and professional awareness on coastal transitions. Satellietgroep developed the artist in residency progra’ for research and exchange of local knowledge on a global level. It invites international artists and scientists to jointly develop and present research articulating a cultural, innovative and sustainable significance of the sea and its coasts by doing on-site research, engaging with local communities, collaborating with local experts and connecting to international networks. It interconnects coastal communities by connecting contemporary research and new works to historic and future coastal developments.

Link to article in Turkish national newspaper by Tan Morgul

Artist Maurice Bogaert (NL), architect Bahanur Nasya & filmmaker Yilmaz Vurucu (TR) were 6 weeks artist in residence in Sinop (TR) and in The Hague (NL) for 'Now Wakes The Sea -NLTR400' in the context of Sinopale 4 and the celebration of 400 years relations Netherlands - Turkey. The exhibition frames the documentary 'The Sea in Me' by Nasya & Vurucu and the 2 conceptual works 'Guestworker' and 'Everything will be beautiful' by Bogaert within the context of a special duo film program with Turkish and Dutch contributions by artists and filmmakers:
Eliane Esther Bots, Zeger Reyers, Cevdet Erek, Barbara Hanlo, Merve Kayan & Zeynep Dadak, Aram Tanis & Jacolijn Verhoef, Rüya Arzu Köksal & Aydın Kudu, Kees Bolten, Imre Azem, BNA. 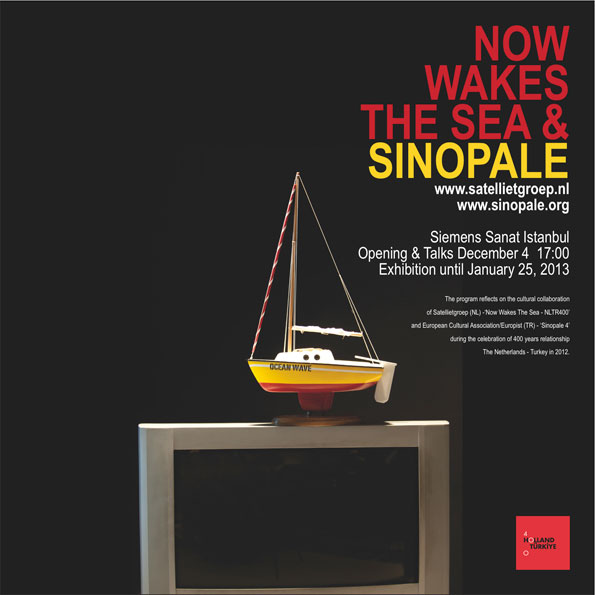 Trailer of 'The Sea In Me - İçimdeki Deniz' by Bahanur Nasya & Yılmaz Vurucu, artists in residence at Sinop on the Turkish coast of the Black Sea for the Cultural Exchange project 'Now Wakes The Sea - NLTR400'

With special thanks to all participating artists and filmmakers, the coastal communities of The Hague and Sinop, our Turkish cultural partner European Cultural Association/Europist, Siemens Sanat, Museon, Turks Museum Nederland, Wander, SICA, SfA, ECF, the Dutch Embassy in Turkey, the municipality of The Hague.

Turkish Premiere:
Bahanur Nasya & Yılmaz Vurucu, ‘The Sea In Me’ 2012 Documentary, 60’
This documentary was produced by architect Nasya and filmmaker Vurucu while they were residents for ‘Now Wakes The Sea – NLTR400’ at Sinop, Turkey, summer 2012. ‘The Sea In Me’’ is a documentary portraying the stories of the residents of a small coastal town. Their history, culture and way of living, which has evolved over centuries, based on the connection with the sea and nature. www.xsentrikarts.com

Eliane Esther Bots, ‘The Dome - The Cone of Silence’ 2012 Video, 16’51’’
This videowork was produced by Dutch filmmaker Bots during her artist in residency at Badgast, The Netherlands. In the short film ‘The Dome - The Cone of Silence’ three men are followed. They visit the coast with great regularity. Their motives are different. This work epics the coast as a sanctuary, where the sound dissolves. www.twosmallthings.com

Zeger Reyers, ‘Drum Kit’ 2004 Video, 8’49’’
A contemporary land art work by Dutch artist Zeger Reyers: ‘Hundred empty oil drums are coupled and placed in the sea. The tangle of oil drums thus became an instrument played on by the sea, producing muffled, banging sounds. At the same time it showed the enormous power of the sea: after seven weeks the drums had been dented and rusted almost beyond recognition.’ www.zeger.org

Cevdet Erek, ‘Shore Scene Soundtrack’ 2006 Video, 5’18’’
Turkish artist Cevdet Erek made the performance work ‘SSS’ about mimicking the sea, or imitating a very common piece of nature by using two hands and a piece of carpet. He recently won the Nam June Paik price for this work. www.cevdeterek.com

Barbara Hanlo, ‘Dichter Bij de Zee / Nearer the Sea’ 1993 Film, 26’
Dutch filmmaker Barbara Hanlo registers with ‘Nearer the Sea’ the end of summer on the North Sea beach at IJmuiden, a scenery a stone’s throw from the Hoogovens (metallurgical concern). The season is over, an enclave of old-fashioned cottages is demolished. This film depicts the changing landscape, the transience and the melancholy memory of a summer that has gone by. www.p-e-p.nl

Merve Kayan & Zeynep Dadak, ‘On The Coast’ 2010  Documentary, 21’46’’
Turkish filmmakers Kayan and Dadak made ‘On The Coast’, which imagines the summer as winter’s frivolous twin sister. Images of the everyday in this small seaside town, and the experimental sound editing that imbues them with a bizarre sense of the surreal, lend this documenrary the form of an ‘essay’ that bears the buoyancy of summer, where vitality and boredom coexists.

Aram Tanis & Jacolijn Verhoef, ‘Departure Bay’ 2011 Documentary, 9’13’’
This short narrative documentary was produced by Dutch artists Tanis and Verhoef while residents at Badgast (NL) in 2011. The work is about the childhood memories of Tanis’ father, who as a child experienced the flood disaster in Zeeland (southern part of the Netherlands, 1953) and remembers conflicting emotions. www.aramtanis.com www.jacolijnverhoef.com

Rüya Arzu Köksal & Aydın Kudu, ‘The Shore’ 2008 Documentary, 56’
Turkish filmmakers Köksal and Kudu made this documentary about the Black Sea shore, where local residents enjoy the final days of summer - just as they have for generations. Fishermen near Trabzon are counting their last catch, wondering how they will survive. All try to ignore the reality that these treasured shores are doomed by the construction of the new coastal highway. www.turkishmoon.com

Maurice Bogaert, ‘Artist in Residence-Guest Worker’ and ‘Everything Will Be Beautiful’
Two conceptual videoworks produced during his artist in residency at Sinop (TR) for ‘Now Wakes The Sea – NLTR400’, summer 2012.
‘Artist in Residence-Guest Worker’ 2012 Video, 6’23’’
Dutch artist Bogaert found work at Ülgen’s Model Workshop, started to work to build model boats. In exchange they helped him build a boat, his own reconstruction of the ‘Ocean Wave’, the boat on which Dutch artist Bas Jan Ader disappeared in 1975. Ader became a myth and a source of inspiration of future generations of artists.
Maurice Bogaert, ‘Everything Will Be Beautiful’ 2012 Video, 1’28’’ + 2’48’’
Walking and biking through Sinop, one of the things that struck Bogaert were the many construction sites, which seem to be preludes of a better, brighter future. But are they? He used different media, like the digital billboards in the city centre. ‘Everything Will Be Beautiful’ is a wish, a poem, a mantra. But who is actually talking to us? www.mauricebogaert.nl

İmre Azem, ‘Ecumenopolis - City Without Limits’ 2011 Documentary, 93’
Turkish filmmaker İmre Azem made with ‘Ecumenopolis’, the most innovative and complete documentary film about urban changes taking place in İstanbul in the last couple of decades with special attention to the construction of a third bridge and its social and ecological impact in the territory.

BNA, ‘Tijdelijk verblijf - Scheveningen: tragic mistake or renewed icon?’ 2007 Documentary, 39’25’’
This documentary gives an insight into the development over decades in Scheveningen, The Netherlands. The village, harbor and seaside resort of Scheveningen experienced a turbulent history during the past century. The documentary tries to figure out what went wrong during this rigorous reconstruction of Scheveningen and what lessons could be drawn for the foreseeable future.