On 30 September Tatiana Fiodorova gives an introduction into her research which she did during her residency in Badgast. Tatiana Fiodorova is a media-artist / curator from Chisinau, Moldova. In her childhood Fiodorova has spend many summers on the coast of the Black Sea where she took long walks along the coastline. Since that time, much has changed. When Moldova was still part of the Soviet Union it had a direct connection with the sea. After the collapse of the Soviet Union in 1991, Moldova lost its sea.

The screening program focusses on performances, video art and animations made by well-known and emerging artists and filmmakers from Post-Soviet countries. The films and video works are visually connected to the sea, the coast or in general the notion of water. In most of the works the authors tackle an underlaying political, environmental or philosophical issue. 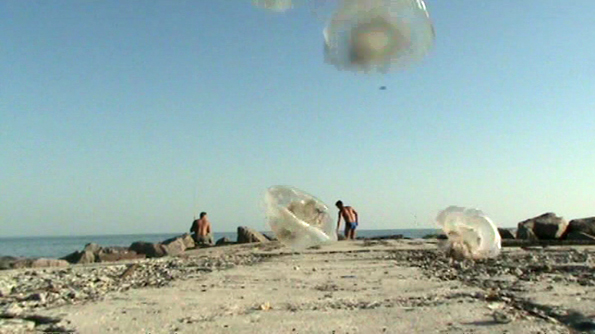 Still from 'Seacoast' by Mykola Ridny

The project Now Wakes The Sea’ (NWTS) is initiated by Dutch Satellietgroep and involves research based artist in residence programs for artists/architects/filmmakers in coastal transition areas in countries surrounding the Black Sea and North Sea to develop new works, select existing works and program traveling film festivals for public screenings and debates on venues, both on the coast of the Black Sea as on the North Sea. The cultural exchange project ‘Now Wakes The Sea’ started in 2012 with the exchange of The Netherlands and Turkey in the context of NLTR400. Satelietgroep is very proud to be selected for the program for Russia, called NLFR2013. ECF and local partners provide funding to continue the project with Moldova and Georgia.

During Juli 2013 artist/director Nicoleta Esinencu from Moldova was artist in residence @ Badgast as part of the international cultural exchange project ‘Now Wakes The Sea’ in collaboration with our partner MediArt Dialogue (MD).  During October 2013 Maarten de Kroon (NL) will be resident at Moldova.
In July Moldovan writer Nicoleta Esinencu was artist in resident at Badgast (NL). Her starting point was an an essay about childhood memories of travels to the Black Sea during Soviet times. She is currently developing a work that will be presented in the form dialogue/performance in Chisinau.
During September Tatiana Fiodorova from the Moldovan partner organisation MediArt Dialog and Artploshadka as resident at Badgast (NL). Together we prepare the artist in residence workperiod of filmmaker Maarten de Kroon in Chisinau, a film screening with Moldovan works in The Netherlands, a film screening with Dutch /Turkish / Georgian and Moldovan works in Chisinau, an artist talk with Nicoleta Esinencu and Maarten de Kroon and a workshop by Satellietgroep and Mediart Dialog in Chisinau in November 2013.