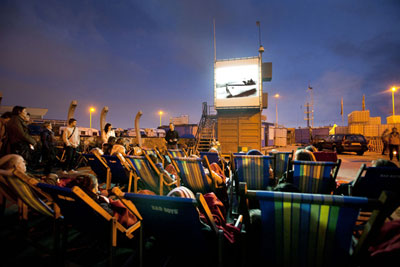 Each night will begin with films and videos found on the internet that lie in the public domain, an area free of copyright restrictions that allows open and creative reusing of materials. These found works, some made in the past years (whose authors have allowed them to enter into the world free of legal restrictions), and some over 100 years old (whose copyrights have expired), will set the theme of the following artist-works to come. David Horvitz, the guest-curator of Cinema at Sea, will also show one of his sea related film works on each night.

7 APRIL START 20.23 U
Following Filip Jonker's artist-presentation, Cinema at the Sea will focus on the theme of boats, and artists who create voyages as art-works. Included will be US artist, Marie Lorenz, who's 'Tide and Current' project in New York, invites participants to venture the New York waterways on her hand-crafted boats. Three short films by UK based Chris Dobrowolski will be screened, documenting his own escape attempts from desolate areas on England's sea-side by his hand-built sailboat and soda-bottle hovercraft. The night will begin with 9 short films found online in various public-domain archives, all relating to boats. A feature length film will follow.

The second screening night of Cinema At Sea, a night of films and videos dedicated to the sea, will be themed around image-sourcing, as well as crowdsourcing. Some works are by artists who use sourced-imagery found online. This includes Luke Fischbeck's video, 'Our Sun and the True Sun,' consisting of sunset videos pulled off of Youtube. Or Lisa Oppenheim's, "The Sun is always Setting Somewhere Else,' originally a 35mm repeating slide projection depicting the artist holding photographs of sunsets taken by soldiers in Iraq that she has found online. Made before the internet, Marcel Broodthaers, 'A Voyage on the North Sea (1974),' from the Ubu archive, contains two found images: a painting depicting fishing ships and a photograph depicting a sailboat (the amateur painter and the amateur sailor, the fishing industry and the industrious nature of the photographic image). In Lindsay Ljungkull's, 'Prelude,' the found-image plays a role in the film's narrative - a photograph of a boat found in an old carousel that is then sent back out to sea.
David Gatten's, 'What the Water Said, Nos. 4-6,' and Francis Alÿs', ''Bridge/ Puente (the making of)', takes the term crowdsourcing offline. In Gatten's work, 16mm film is left in crab nets in the Atlantic Ocean. The result is made by the energies of the crabs. Alÿs' work is a video documentary of the attempt to make a bridge of boats from Cuba to the USA, using the combined small efforts of local boaters.

David Horvitz will present documentation of his recent project 'Public Access', which consisted of a road-trip up the entire California Coast earlier this year. On this travel he made photographs that were inserted into public online archives with the intention for them to be found, sourced, and recirculated. An amateur Youtube video  made for a New Order song that was randomly found by a friend of Horvitz, will be shown, as it sourced one of the coastal photos. In the video comments, the creator writes: "All pictures that I post videos are found in the pages of google, blogs, websites, etc.. To locate these, search for topics such as loneliness, sadness, etc.."

21 APRIL START 20.47 U
Themed around travel, the night will focus on artists who make work about and/or while traveling. Included will be Peter Hutton's newest film 'At Sea,' and works by Ellie Ga, Jeanne Liotta, Fern Silva, Sena Basoz, and more.

Satellietgroep invites guest curators to compose a special film program as a tribute to the sea. In April the program of the open air Cinema at Sea @ BADGAST starts. David stays at DCR Gueststudio to work on the program.

David Horvitz was born in Los Angeles, and currently lives in Brooklyn, NY.  His work spans photography, curatorial projects, web-work, publishing, writing, and print media. Recurring interests across these disciplines include attention to strategies of information circulation and the impermanence of digital artifacts. Much of his work points to a nomadic romanticism, often referencing travel and the sea. Horvitz grew up on the Pacific Ocean, which is a continuous theme in his work. For a recent exhibition at SF Camerawork in San Francisco, he drove the entire California Coast, driving as close to the water as he could. In another earlier work, Horvitz made a photograph of the ocean view at the southern most point of Japan, having travelled through various small islands to reach the destination point.
www.davidhorvitz.com


David Horvitz, Northern California at the point of Bodega Head (2010) 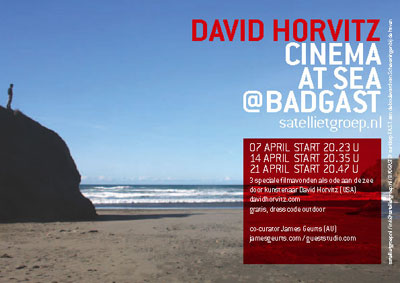