1. Francois Lombarts, 'Sinking into the landscape', 11,28 min., 2013
'Sinking into the Landscape' by Francois Lombarts is a voyage through the water of all the the canals, ditches and trenches of the Haarlemmermeer polder. By visualizing the physical experience of the polder it is an attempt to understand the idea of being below the sea level submerged in a water landscape. 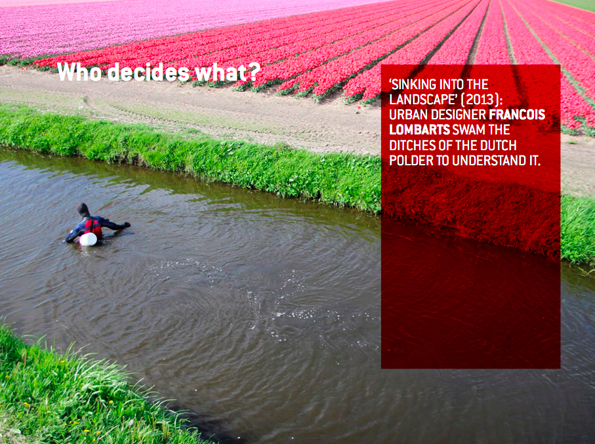 2. Felix E. Feist, Excerpt of 'Deluge', 4.28 min., 1933
‘Deluge’ is an almost-forgotten early American disaster movie. For decades, it was thought that all prints had been lost, but an export version, dubbed into Italian and shortened by ten minutes, was found in the 1980s. This video shows only the disaster -the unexplained destruction of New York (and the rest of the world) by earthquake and flood- itself. A gigantic model of lower Manhattan was built, with breakaway buildings shaken to pieces and then washed away by thousands of gallons of water from dump tanks.

3. 'Little Dubai', Astrid Bussink / Ana Tsimintia, 10 min, 2013
'Little Dubai' gives a humorous insight in the new architectural developments of Batumi, Georgia and focusses on how Batumi as a city presents and profiles itself.

5. 'Sea Bites', David Beriain, 12 min., 2011
The wind roars. The sea crashes against the cliff. Two meters of rock, that is the strip of water and oxygen where the goose barnacle grows. Two meters where the sea shows no mercy, and beats with millenary strength. A line of waves and foam where Serxo and his comrades fight for a bite out of the sea. A line between bravery and fear. Between recklessness and common sense. Two meters without margin of error. That is where the barnacles live. Where Serxo lives. SEA BITES is the battle against the sea from some warriors that don't consider themselves heroes.

6. 'The Acid Ocean', Dan Griffin, 4.37 min., 2010
Dr. Steve Palumbi shows how the increase of CO2 in the waters of the ocean may affect certain types of sea life. This dramatic view explains that if the level of CO2 continues to rise in the ocean, many creatures that have calcium-based shells may not be able to survive at all. “The Acid Ocean” is part of a series of videos on the oceans.

8. 'St. Kilda', Mels van Zutphen, 15 min., 2003
St. Kilda, off the west coast of Scotland, is the most remote archipelago of Great Britain, with the tallest cliffs. This group of islands is still known for its large populations of puffins and gannets. For centuries, a small community was able to survive here on a few square kilometers, practically isolated from the outside world. But the last islanders were evacuated in 1930. The only two survivors of this period are old now and quite unapproachable. St. Kilda is a film about rituals, birds, bold ventures by bachelors, and big toes.

9. 'Tidal waves', Salise Hughes, 2 min., 2005
The narrator of the film, who is reciting his own dream, has been plagued with dreams of tidal waves before he was old enough to know what one was, or ever saw the ocean.

10. 'Stiltwalkers', Sjaak Meilink, 12,27 min., 2002
A fisherman who sketches to pass the time on the vast sea encounters a surreal and fragile two-dimensional world, which seems to have sprung forth from his drawings, and is guarded by a tribe of stiltwalkers.

11. 'Be Water my friend', Antonio Martino, 15 min., 2009
"What is today, is not what it was yesterday nor what it will be tomorrow." In this sentence, the despair and the resignation of the ex-fishers of Muynaq, a little city on those being the coast of Aral Sea. The city, being a ghost one by now, and its inhabitants are the victims of an unstoppable environmental disaster, going on since decades.